It was in 2012 that I saw the movie “Tower” at a local movie theater in Bundang, South Korea. I remember it so vividly as the cinematography made me feel as if I had been in that situation. “Tower” starts with each character having their own reason to be at TowerSky, the fictional highest multipurpose building in Korea. During a Christmas party on the highest floor, there comes an unpredictable accident, which turns into flames and disaster. Although the climax comes from a firefighter sacrificing himself to save the remaining victims, I believe the climax is only possible due to the continuous tension coming from the situation of getting stuck in a limited area which is impossible to escape.

It makes me wonder how the world has changed since then regarding fire evacuation. How are we prepared to evacuate from in-building fire? Is it safer now? Unfortunately, it seems not much has changed. Though we have some upgraded technology for relevant situations, we still linger with a somewhat ‘traditional’ methodology. We remember the 2017 tragedy in West London.

On 14 June 2017, a fire broke out in the 24-storey Grenfell Tower in North Kensington, West London, at 00:54 BST. The fire was caused by a malfunctioning refrigerator on the fourth floor, and rapidly spread up the building’s exterior covering all residential floors. In spite of the struggle of more than 250 firefighters, the fire lasted more than 60 hours before it was finally extinguished. 223 residents had escaped, 70 injured, and 72 died. The death-to-escape ratio was 32.3%. It was the deadliest structural fire in the United Kingdom since the 1988 Piper Alpha disaster. Although the main reason why the fire spread so rapidly was because the exterior of the building did not comply with regulations, we must ask why so many people could not get out of the building. 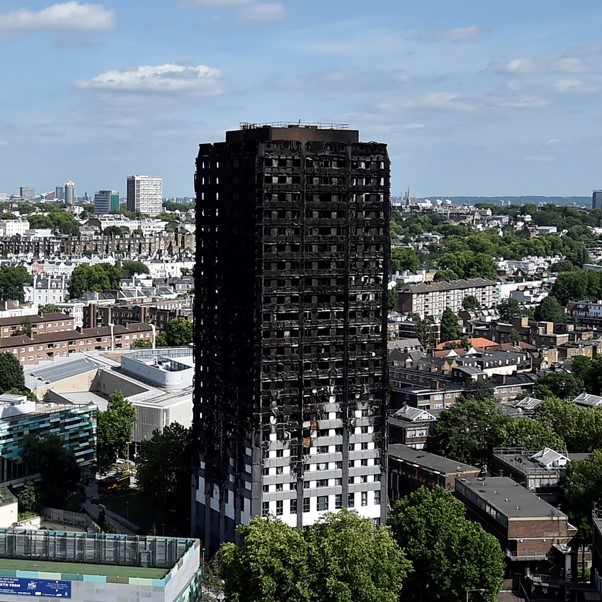 Let’s simulate an actual fire situation in a building. It is a quiet afternoon, everyone is going about their business. Nothing different from the other day. Suddenly, but still quietly, an electrical short from a poorly managed electric wire sparks a flame. After three to five minutes of smoke, the heat is transmitted to nearby objects such as carpets, and now there is a full blown fire.

For now, it is impossible to detect the fire until it gets smoky enough for the smoke detector to perceive it or hot enough for the thermal sensor to catch it. Time passes, extending the necessary efforts to extinguish it by the second. Finally, the trusted smoke detector catches it, and we hear the alarm.

The sound makes everyone in the building aware, but nobody moves right away. Since there have been quite a lot of false alarms, people do not fully trust the system. Some people open their doors, look to each other with an awkward ‘this-is-false-right?’ expression, and then go back to their work again. By this time, it’s already too late.

However, let’s assume that someone notices the fire with his or her own eyes and tells others to evacuate. The problem then is that no one knows exactly how to evacuate. There has been an evacuation drill, but nobody has taken it seriously. They start to panic, bump into each other, and everyone knows there is danger waiting for them right in front of their eyes.

Firefighters arrive. They know the flame is covering the building; however, unfortunately, they cannot figure out where exactly the fire has started. They don’t know where the people are located in the building. Nevertheless, they shoot the water cannons from outside, another team enters the building to save people. They manage to save some but fail to find everyone. Sometimes even firefighters are held hostage by the monster that is fire. 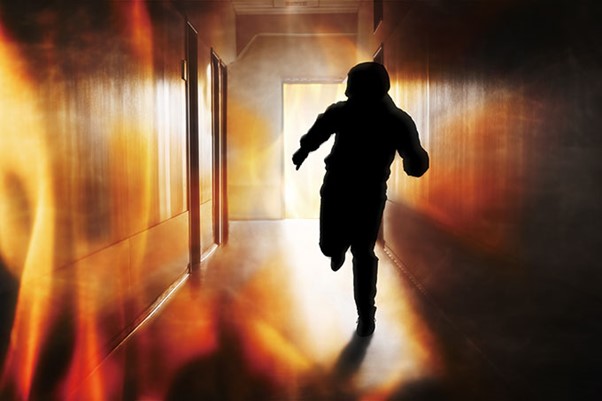 Let’s break down the situation. The detection was late. People did not know how to respond to the sudden situation. Firefighters could not get a clear view of what was happening internally, which complicates the prioritization process. What was the outcome? Millions of dollars in property damages aside, it cost human lives.

What could we possibly do to make things better? As one brilliant factor for the fourth industrial revolution, we might be able to apply artificial intelligence (AI) for fire evacuation. There are many AI companies in the market dreaming of future solutions, but let me give an example of how an image recognition AI company called Alchera Inc. from South Korea could potentially tackle this issue. Alchera currently has three product divisions: visual anomaly detection technology (VADT) (currently for fire detection), contact tracing (CT) for abnormal behavior detection, and facial recognition available as an SDK and API.

Our fire detection solution, branded as AIIR, uses advanced AI algorithms to determine smoke or fire from a video feed. While this can be extended to detect other anomalies, we are currently applying it in the California wildfire environment. Contact Tracing is one of the latest developments, based on similar methodologies as the fire solution, but focused on determining people from video feeds and analyzing their behaviors. Some example uses are for market research and behavioral analytics such as in shopping centers. By understanding the movement of consumers, we would be able to analyze and forecast the market value of specific areas. This of course has safety elements as well, as abnormal activity detection such as people falling and crowd gathering can be implemented. Lastly, we have Alchera’s bread-and-butter solution — face recognition. Alchera has deployed face recognition in a number of environments and this continues to add value to through safety and convenience.

So we have our three AI solutions. Going back to the situation described above, there is an electrical short causing smoke to arise. Before the traditional smoke detector detects it, which may take up to 9 minutes, one of the CCTVs in the building which is interlinked to our VADT software recognizes it as smoke and automatically alerts the public, including people working in the building, managers in the security office, and nearby fire stations. The same camera infrastructure is ready for people going into panic mode, and kindly guides them where to evacuate through contact tracing software and a roadmap of the building in order to find the shortest and safest way outside. Still, there may be people who do not receive guidance by the AI for some reason, and would face the same issue as before. Through the CCTVs installed throughout the building, CT software would trace their movements and record the latest location and movement direction of each person. Also, the facial recognition software would at least have the face information of staff working in the building, and it would be possible to identify where the person went and who that is at the same time.

Meanwhile, the firefighters are informed by the VADT alert system of which professional agencies have got the notification and who is taking action. It’s called alert-integration. Throughout the response process, they’re being reported of the current situation inside the building. They know where the fire broke out, how many people evacuated, how many remain inside, and therefore which action is priority. They arrive at the site, initiate the evacuation process without losing time, and ideally, we have a better result than the Grenfell Tower incident. All thanks to technology.

As mentioned before, I cannot ensure that this would be perfectly realized in the near future, nor can I hastily conclude this is ‘the only’ perfect AI solution for fire evacuation. However, it is still noteworthy that someone on this planet is imagining an even better plan to save people and that a company is dreaming to bring that to life. Quoting the famous line from Interstellar;” We will find a way. We always have.” And I add, why not AI for fire evacuation?

About Alchera: Alchera Inc. is a team of AI experts who solve problems where there is a need for AI but limited by resources. With world-class speed and accuracy, Alchera deploys systems and hardware agnostic AI technology to society-impacting industries.

Go to List
Free Trial
Any question?
Leave your inquiry.

Be the first to know about Alchera